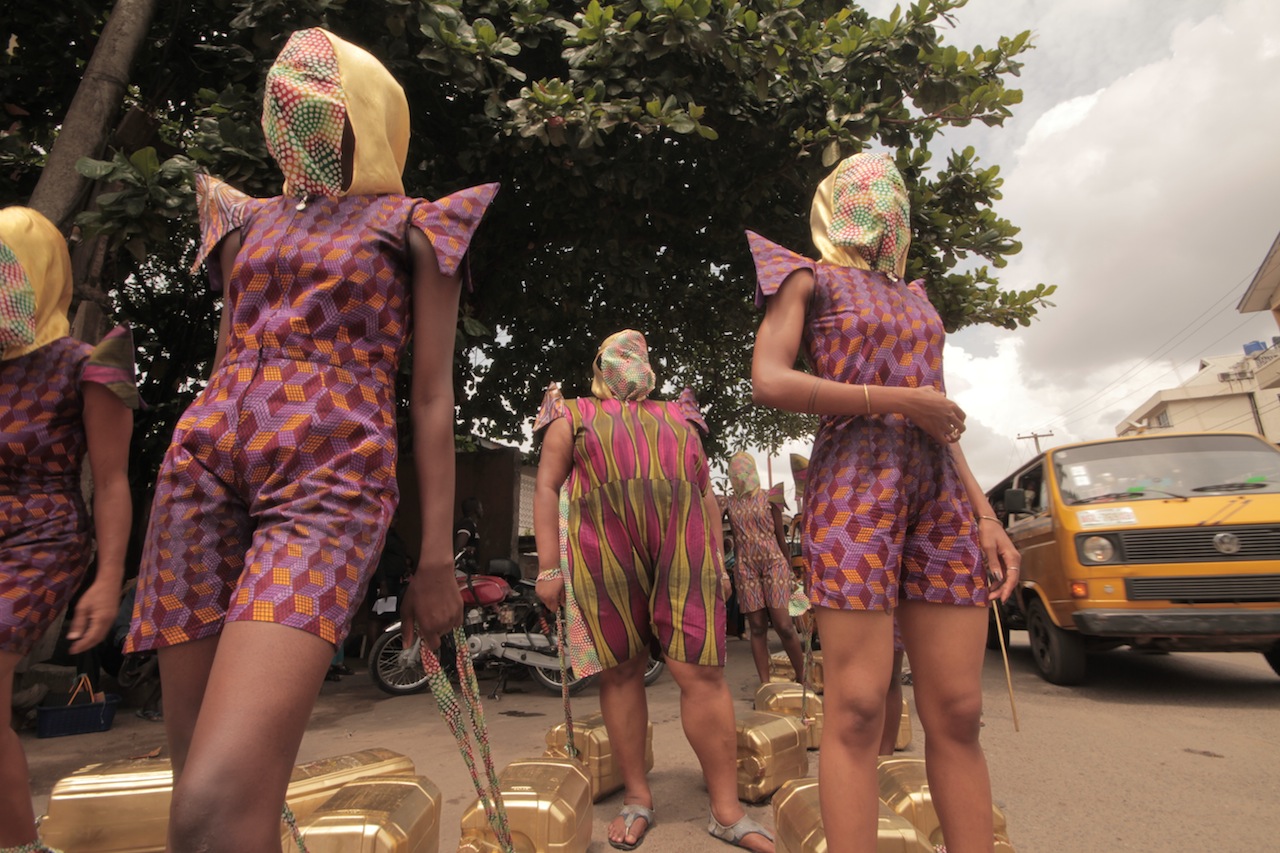 As far back as I can remember, I have always been an artist’s guinea pig, whether its being an extra in my friends Claire or Ghandi’s student films or Victor Ehikhamenor’s installation piece for his exhibition ‘Entrances and Exits’, I am always a willing collaborator. This was the reason why when Nigerian/American artist Wura-Natasha Ogunji asked me to be a part of her performance piece titled ‘Will I still carry water when I am a dead woman’, I couldn’t refuse. The idea she told me, would be myself and other women, dressed in mini jumpsuits carrying kegs of water strapped to our ankles walking through the inner streets of Sabo, Yaba led by Ogunji herself and documented by videographer  and film maker Ema Edosio. During hangouts with Ogunji, she had explained that she was very interested in using her work to explore women in public space. She had also mentioned her obsession with the Egungun masquerade and her curiosity as to why women were prohibited from the practice. 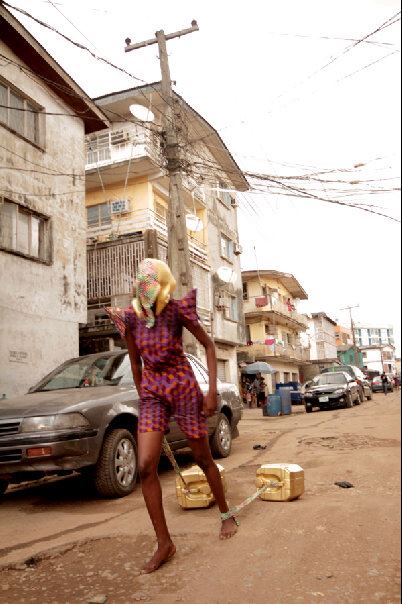 Our costumes were simultaneously an ode and a rebellion to the Egungun, which Ogunji had termed as ‘Futuristic Egungun’. Perhaps it was our own way of re-writing the narrative of culture and history. Hooded mini jumpsuits with pointed space like sleeves made from Ankara fabric with little holes punched through our masks for vision. Twenty-five litre plastic kegs spray painted in gold and filled with water were strapped to each ankle. I opted to drag mine with my hands due to my already dodgy ankles. The journey started from the Centre for Contemporary Arts(CCA) in Yaba through the back roads of commercial avenue to the final destination which was Wura’s house. I had no expectations beyond the obvious gawking and hurling from bus conductors and puzzled observers, however, the performance for me took many different turns a little far off from what Ogunji herself had anticipated. Mostly, anthropological and sociological in terms of participant observation. 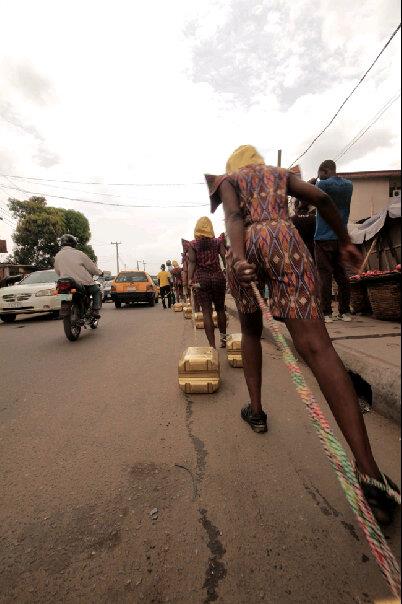 When we started, people looked, stared, and some asked what it was we were doing. A gentleman even went as far as dropping a hundred Naira note on my shoulders. We dragged the kegs, leaving trails of water behind. The friction between the plastic and the tarred road had caused for the containers to start to give way. About twenty minutes into our somewhat two mile journey, people stopped looking, stopped caring, they just went about their business.   Some of us moved faster than the others, so at the beginning we would stop and wait for the others to catch up. Again just the way puzzled observers stopped observing, we stopped waiting, and during the very few times we did, I noticed the impatience and agitation in each performers body language, the sudden realisation that each woman had their own load to carry to the finish point and thus the feeling of a certain lonliness through the journey. 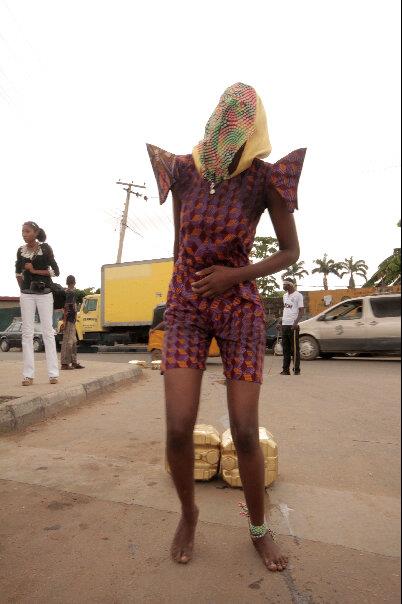 The experience for me went beyond the test of physical endurance, pain, rebellion or even a loss of self awareness, but more of a living and breathing metaphor. Dragging the heavy containers of water through a public space became a symbolism of the expectations, desires and roles society had placed on women. More interesting is how quickly the observers curiosity diminishes and the realisation that you have become owner to the burdens that have been placed no you. There is of course the element of selfishness that brews amongst ourselves, you stop waiting because you become consumed with meeting up with the expectations placed on you and getting to the finish line. At the end of the journey, there was no victory parade, no crowd cheering, no home coming. One of Ogunji’s keg’s had leaked through the journey and at the finish line, it was empty.

You can find out more about Wura Ogunji’s work on www.wuraogunji.com 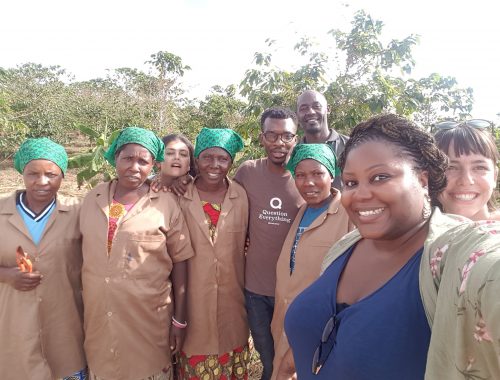 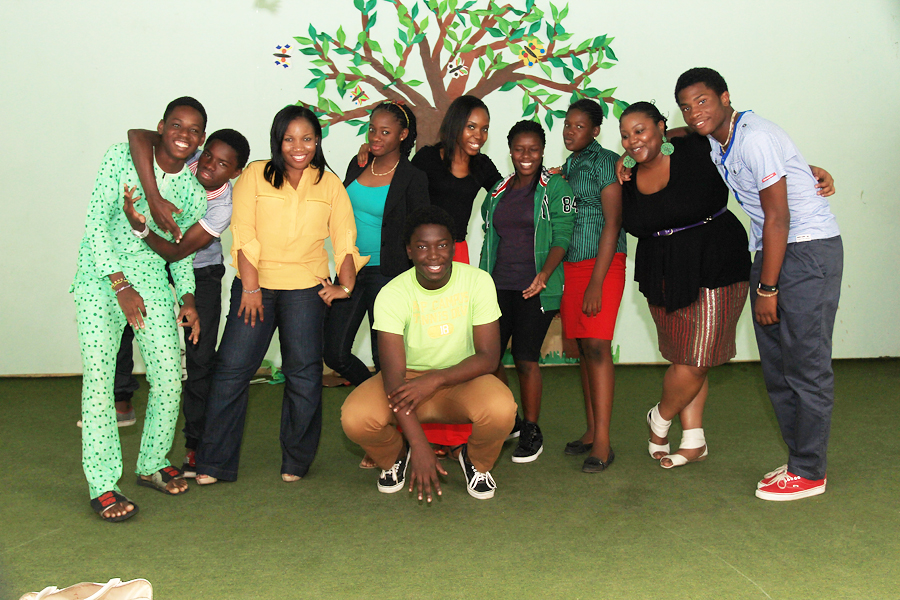