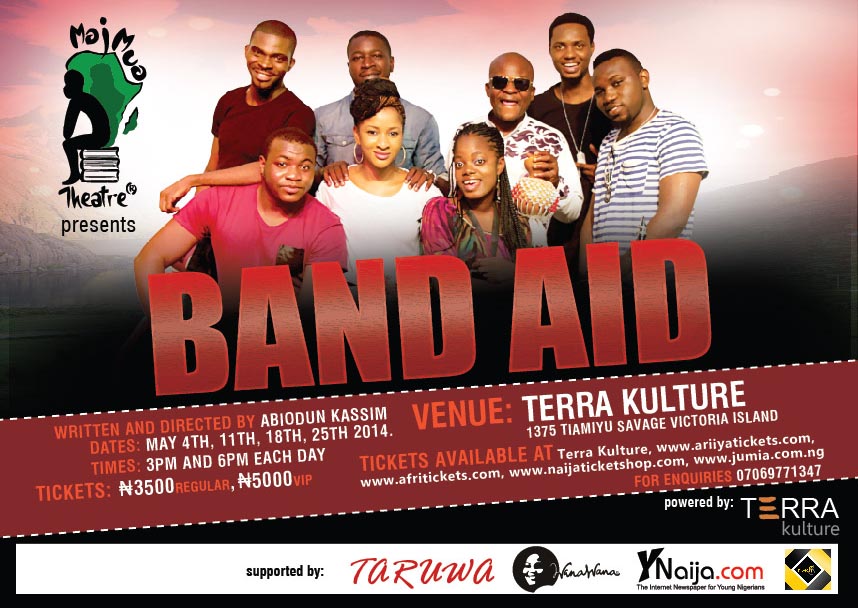 I am really excited about the play Band Aid, not only because i was invited to workshop the play whilst it was still in development but also because i found it fresh and contemporary. I would admit that the theatre had been feeling a bit stoic and drab for a while and it was refreshing to read material that spoke to the time in terms of subject, characters, rhythm and language. But most of all because i remember the play’s writer/director Abiodun kassim not to long ago performing monologues at open mic venues to directing ‘A husband’s wife’ last year at Terra Kulture and now Band Aid.

Band Aid centres around three friends with distinct personalities  who seem clearly united by their love for music. For the three young men, the loyalty of one is soon questioned by the two others when a twist in the tale sees them falling in love with the same girl. Though is seems she has come to save them from themselves by taking them on as a project, we realise there may be a bit more to it. At first you wonder whether Ivie will pull a Yoko on the boys, but it is nothing like that. The play explores more deeper themes in very subtle ways.

I was opportune to watch the first show and as warming and reflective as it is, the play does get many laughs thanks to the rascal, lovable rogue (sort of) skirt chaser character Flex. Flex played by Tosin Oluwadare for me is a revelation and more so perhaps because he isn’t theatrically trained so comes off very naturalistic which brings that needed freshness that i talk about earlier. Truth is he does steal a lot of the scenes. I remember my friend Rayo sitting next to me at some point yelling ‘Where is Flex’. The cast did a good job at bringing this to life but what it did fall short of, was pacing in terms of moving from one scene to the next.

Ticket for the play are available at Terra Kulture and Quintessence Review Of Strip In the Sunday Guardian